Search
HomeDisney ParksClub Villain and Disneybounding with the Queen

Club Villain and Disneybounding with the Queen

Many of you have seen my review of the opening night of Club Villain at Disney’s Hollywood Studios. They originally scheduled it for mid-January to the end of February. After the initial reviews were overwhelmingly positive, it became the hottest special event ticket in Disney World. The value was certainly good at the $100 price tag, considering you got a show, full dinner and dessert buffet, and an open bar. Plus the opportunity to have a meet and greet with the four villains with no waiting at an ultra private event. So it didn’t come as too much of a surprise when they raised the price to $130 per person once the March dates were added. Offered twice a week thru the month of March the event was still sold out.

Well now they have added new dates for both April and May. Two shows every Saturday night at 5:45 and 9 pm. The price is holding at $130. Is it worth the higher price? I would say yes. I have yet to talk to anyone that has attended the event that has felt disappointing. In fact, all were blown away by the high quality of the performances, food and decorations. 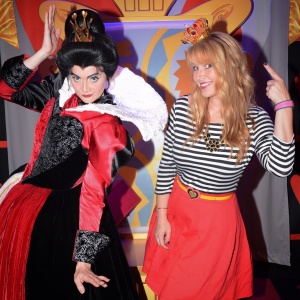 I went a second time in March. This time I was prepared and decided to go DisneyBounding as the Queen of Hearts! (If you’re not familiar with Disneybounding check this out.) She was my favorite when I went before and since I all ready had a dress that would work, it was an easy choice. 🙂

The backgrounds they have set up for each Villain are so fabulous. Before they come out you can take your own pictures on their thrones so make sure you do that.

There are lots of photopass photographers so use them as much as you can. We actually visited some villains more than once. When it gets towards the end of the night you can go see any of them since all the time windows for meet and greets are done by then. I decided that I wished I’d taken selfies with the villains instead of just the photopass pictures so I went back and got them.

If you can disneybound as one of the Villains it makes it so much more fun! Disney World does sell Maleficent headband style ears that you can buy. Or if you have some time, check out Etsy for some custom mickey ears inspired by your favorite villain.  I loved the reaction of the Queen of Hearts when I met her! (Hover over the pictures for the captions, click to see them bigger)

Some of the performers were different this time but they were equally fabulous. They did change a few things including encouraging everyone to get on the dance floor by teaching us a Villain inspired dance. This was a great idea since the first night the only people who really got out on the dance floor were very young children. When it’s only small kids dancing you won’t see many adults get out there and dance. This got everyone warmed up and used to being out there and kept more people out dancing afterwards. It was a great addition.

Speaking of young children, there were more of them the second time I went than the first. I’ve expressed my opinion on this before, but I still stand by the fact that this event is more adult themed. In fact, I would say it’s the most adult oriented event I’ve ever been to at Disney. They won’t say you can’t bring your young children, but they will still charge you full price for them, in hopes that it will limit them. The fact is, if the event was full of very young children it could easily kill the whole vibe. For people who are there without their kids, or maybe have older children, you just don’t want to deal with a ton of little kids running around, chasing each other thru the tables and fussing because it’s late or they are scared of the villains or whatever. Even though there were more than the first time, it still wasn’t so many that it really bothered anyone. But I’d still say unless your children are super into villains, or unless bringing them with you is the only way you can go, I’d leave the small kids somewhere else for the evening. 10 and up is no problem at all. Keep in mind the music is loud and club-like, and the liquor is flowing freely. That’s all I’ll say about that. 🙂

Overall I had an equally wonderful time at Club Villain the second time. Queen of Hearts and Kanzo are still the stand out performers to me. If you have an opportunity to go I definitely suggest you try it. Here the official link to check for availability. If it’s available, book it. You have until midnight the night before to change your mind with no cancellation fee. So grab it now and decide later. They will be gone soon. Disney hasn’t officially announced the addition of new dates, so once they do it will book up. Here’s the rest of the pictures from that night. If you go, please let me know what you think! And don’t forget you can connect with us on Instagram! I post pictures all the time. You can follow along with our adventures when we are at the parks.