Spring Break is starting and the holiday crowds make navigating the parks a real challenge. There are some people who only visit Disney World during high crowd times and assume it’s part of the Disney experience. It really is not. All though attendance has only gone up over the last several years, there are times when you are able to experience the parks without the hustle and bustle of so many tourists. However, if you are planning to visit Disney World at Spring Break it doesn’t mean that your trip won’t be fun. It does mean that you need to be prepared. While some advance planning is always a good idea for Disney, high crowds make it essential to get your money’s worth out of the trip. Are you new to Disney trip planning? Have you looked into advance planning and felt so overwhelmed with the amount of information that you decided to just show up and wing it? I get that. I do. You’ve come to the right place…er, blog.  This list is a great starting point for beginners. Here’s my top five tips for visiting during Spring Break, or really anytime there are Holiday crowds.

1) Start early. It’s cooler and the crowds are lower. Yes it means getting up early even though you are “on vacation”. I know. I know. But trust me on this. I try to arrive at opening at least one day for Magic Kingdom, one day for Hollywood Studios and one for Epcot. So that means three days of an average week-long vacation I will be getting up early and hitting the park at rope drop. The other days I will have a slower morning and stay out later at night instead. Usually I try to alternate these early mornings with slower ones. It works out well. The one park I will skip opening is Animal Kingdom. It’s not totally necessary for that park (all though it’s nice if you can). It’s vital for Magic Kingdom and Hollywood Studios. And a good idea for Epcot. By the time people are meandering into the park you will have all ready done the most popular rides in the coolest part of the day. Don’t you look like a Disney pro? 😉

2) Make Fast Passes (FP) ahead of time for each park day. This will require you to know which park you’re going to each day. If your plans end up changing and you can’t use the FPs that’s fine. They are free to get and no penalty if you don’t use them. The easiest way to book them is on the “My Disney Experience” app. Load each member of your group into the app and scan their park ticket (you can scan the card or type in the number from the back of their magic band) so you can book FPs for everyone in your party. You’re allowed to book three at a time for each person. Once they are done you can visit a FP kiosk and schedule more. (Tip: try to avoid the kiosks in Fantasyland by Philharmagic. They are always packed.) Even if you don’t book any more than your first three you will have shortened your wait on some key rides. Which brings us to…

3) Use the Fast Pass system wisely. Don’t waste your FPs for rides that don’t get super long waits (i.e. Journey into Imagination). Don’t use them for shows that allow a large group entry at once (i.e. Laugh Floor). Use them for your must-dos so that you know for sure you will fit that attraction into your day. Remember they can be used for character meet and greets as well as rides. Try to schedule them for late morning on the days you plan to arrive at park opening (see #1). You will enter the park at “rope drop” and head straight to a ride that gets really long waits. You should be able to get two to three popular rides in by the time crowds are starting to pick up, and then move to your first FP ride. Look at you. You just saved yourself hours of waiting in line. Go buy yourself a churro.

So which rides need FPs? There a some rides at each park that attract massive wait times. For these, try to ride them either: first thing at opening, with a FP, or right before park closing at night. 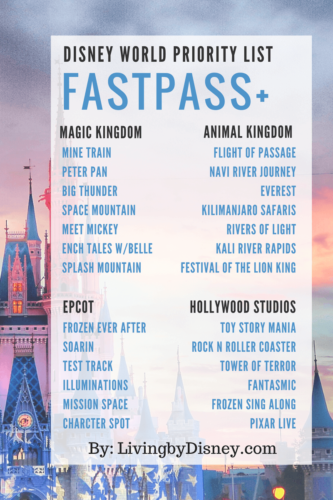 4)Take advantage of Extra Magic Hours. This is one of those touring strategies that is only worth using during peak crowds. If you stay at a Disney resort you get special hours for each park that only resort guests can use. There are still a large number of people who will get access to this, so it’s not as much of an advantage as you may think. However, when crowds are very high we need all the help we can get. There is one park each morning and one park each evening. (Check Disney’s official calendar to see when they are.)  Tip: if you are not a resort guest, try to avoid these parks close to the Extra Magic Hours times. Don’t choose that park for opening arrival because when you walk in at official opening time, the resort guests will have been in for an hour and you will lose any advantage you may have had in beating the lines. Makes getting up extra early a total waste, and who wants that? Same goes for staying until closing. Which bring us to…

5)Stay late until closing.  Whatever the official closing time is that is when the rides begin to close lines and shut down. But they don’t chase you right out of the park. In fact, many people don’t realize that the entrance areas (Main Street or Hollywood Boulevard in HS) stay open for at least an hour after the official closing time. During the last few hours of the park it’s significantly less crowded. This is a magical time in the parks-particularly for Magic Kingdom. The park is so beautiful at night with all the lights. The temperatures drop and it feels more comfortable outside. Plus the evening shows are some of the most magical experiences you can have in the parks. The Main Street Electrical Parade, Celebrate the Magic projection show on the castle, and Wishes fireworks are all a must do. Fantasmic and Symphony in the Sky fireworks at Hollywood Studios, and Illuminations at Epcot are all amazing. Rivers of Light, when it begins at Animal Kingdom in April will no doubt be incredible as well.  Take your time after official closing time to soak up the magic of the park, do a little shopping or take some pictures. These will be the moments of your vacation you’ll really remember. Tips: They will most likely have two showings  of some of these like Fantasmic, the Magic kingdom night parade and the castle projection show. When that happens try to go to the second one as it will be far less crowded. Also, as far as optimal viewing, the castle projection show is best seen up close to the castle. But Wishes fireworks are best viewed farther down Main street. Otherwise the castle itself blocks much of the fireworks.

Do you have any questions about visiting Disney World at Spring Break or during other holidays? Or trip planning in general? Leave your question in the comments and I will be happy to try to answer. I hope everyone who plans to visit this Spring has an amazing vacation! If you see me in the parks, make sure and say hello! 🙂