Planet Hollywood Restaurant has been a long time fixture at Disney Springs, or what used to be known as Downtown Disney. Boy has this place come a long way. (anyone remember Pleasure Island? There’s a throwback for ya.) I must say, Disney has done a superb job with this whole area. The redesign and expansion have really made it a true destination for great food and shopping.

It seems like they’ve been working on the Planet Hollywood for ages. Other restaurants have broken ground, finished construction, and been open for months in the same amount of time. But I suppose sometimes it can actually take more time to remodel than it does to build new. And it is a huge building.

Well it finally opened for business this week and is now available for drop in dining as well as reservations through My Disney Experience. Reservations aren’t hard to come by at this point since it’s so new.

Now, before I begin my review I should preface this by saying that it hasn’t had the “official grand opening” something our server reminded us of several times. I’m not really sure in the restaurant world how significant this fact is. Maybe it’s the equivalent to a “soft opening” in theme park attractions? Anyway, since this review isn’t going to be very complimentary I feel better by giving this fact as a disclaimer. 😉

Since many of you don’t really read but skim through and look at pictures, (Yes I know you do. Don’t try to deny it. It’s fine. I’m sure you do it on all the blogs, not just mine. Right? RIGHT?! Ok. Then it’s fine.) I’m just going to give you a quick summary here, with details as I show you the pictures.

I wouldn’t go back until they have more time to work out the kinks. I’d love to think they will improve with time, and I’m sure they will get better with the timing at least. However, it’s still not going to make the food great. It’s like eating at an Applebee’s or TGIFridays if you’ve been to those. It’s just okay. But the difference here is you’re paying premium prices, so I just can’t justify it. Not when there’s so many fantastic restaurants right next door. You could go to The Boathouse, Raglan Road, Homecoming, Morimoto Asia, or even Blaze Pizza and have far better food.

Now let’s get into the full review.

The separate Stargazers Bar was really nice. I’d like to go back and give it a try. They had a great selection of craft beers to choose from. 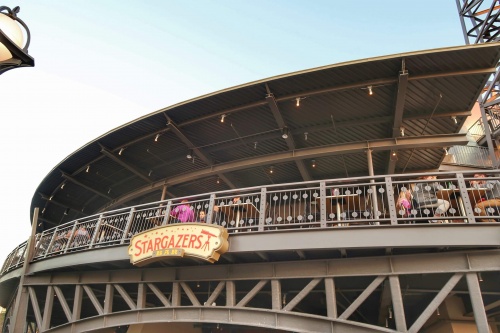 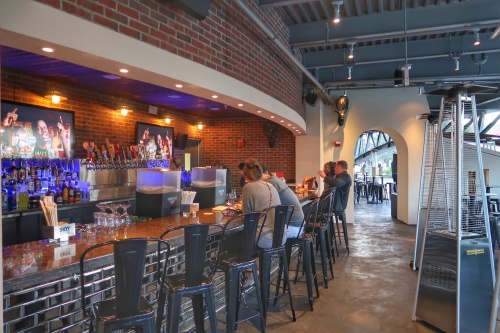 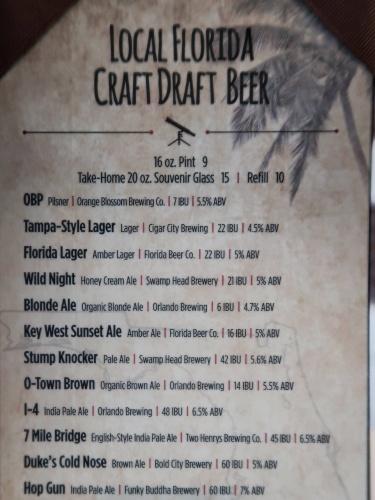 They had a lot of fun merchandise. There were quite a few things I liked. Galaxy/space prints going off the Observatory theme, as well as some Steampunk style as well. Those things reminded me of Toothsome Chocolate Factory in Citiwalk. In fact, much of this place, including the dessert menu reminds me of Toothsome. (Of the two Universal’s giant Steampunk Chocolate factory and restaurant is far, far superior.) 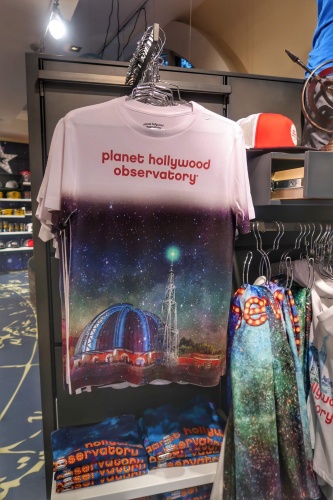 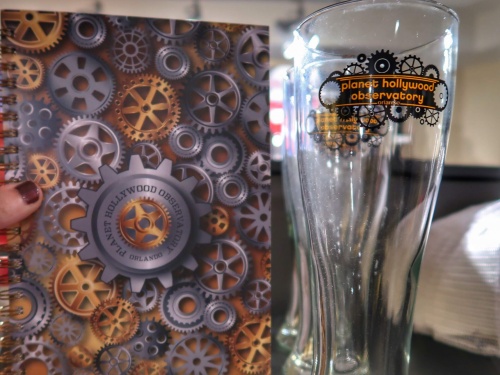 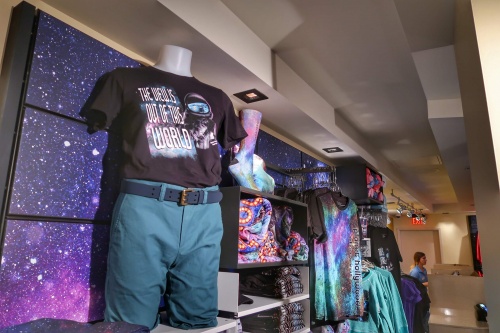 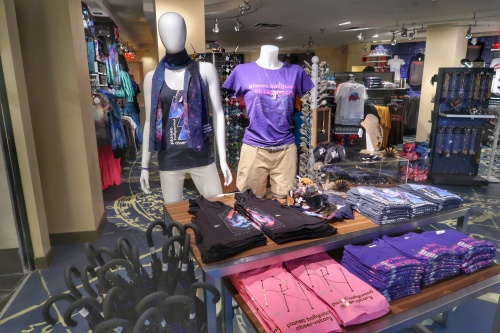 The main restaurant area has several floors that you can eat on. I’d prefer the view from the higher floors. Each floor has its own bar. The giant dome of the globe (observatory) serves as a large projection area for music videos to play. It is very, very loud in this place. Definitely not the restaurant to choose for romance, or quiet conversation. Much more young, energetic vibe which is pretty much what you’d expect from this brand. Here’s the view from the first floor and from the second floor dining area. 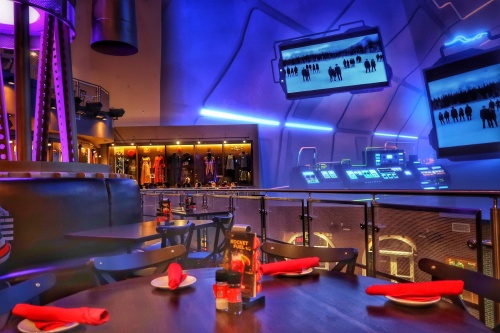 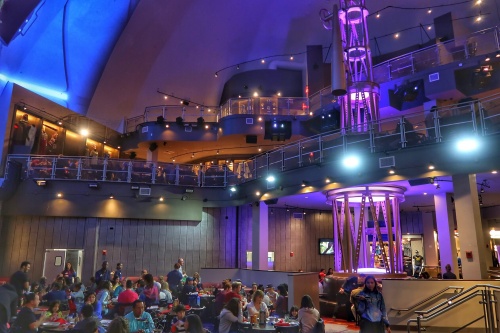 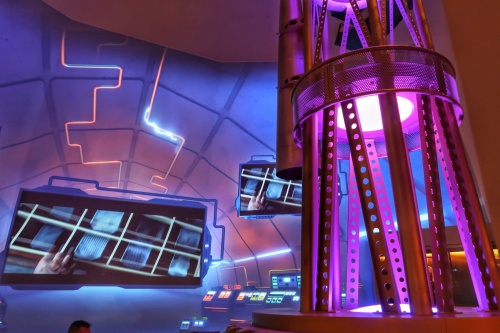 It took about 30 minutes to get our table, despite the fact that we had reservations and the place wasn’t at all full. But that wasn’t a huge deal, and if the rest of the night went smoothly I wouldn’t even mention it. We were seated outside on the second floor balcony. I was surprised since usually places ask if you want or mind sitting outside. The server said this was the only table we could get. So okay, we will sit outside. The view was gorgeous! 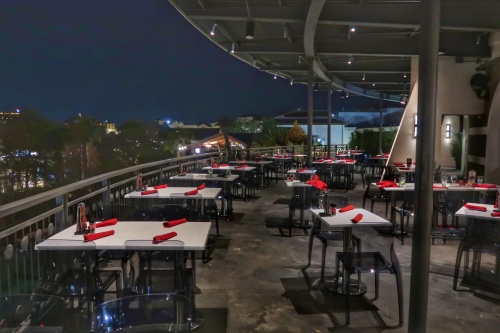 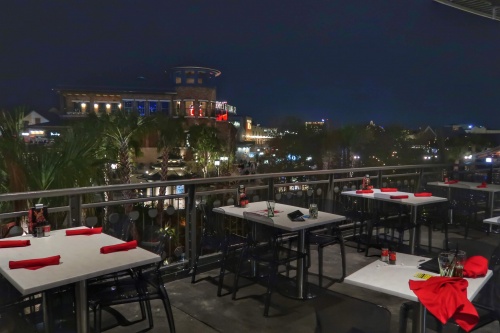 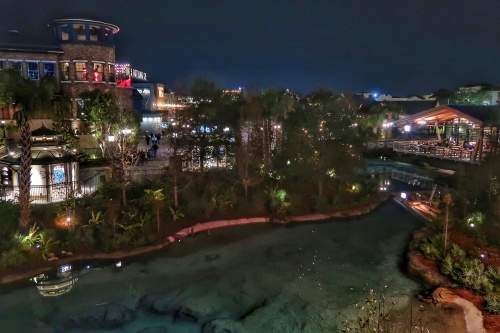 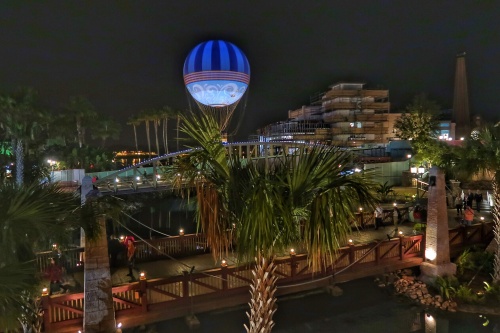 Unfortunately it was pretty chilly that night (about 55 degrees) and there weren’t any heaters out there. It wouldn’t have been the worst thing but the meal took so long that we really froze by the time we were done. We arrived at the restaurant at 7:45 and didn’t leave until a little after 10 pm. That’s a long time to sit in the cold.

When we started to order beer we were told that they were out of that draft. When asked what they did have, the reply was we are out of all drafts. All draft beers? Yep. So we ordered a few cocktails. These were pretty much what you’d expect and tasted fine. They were all $12 each. They offer many “signature” drinks that are served in their own souvenir glasses that you get to bring home. They were around $20 and up. 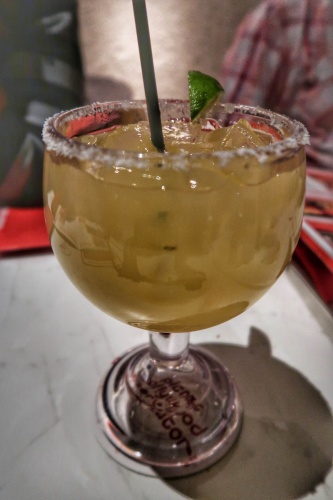 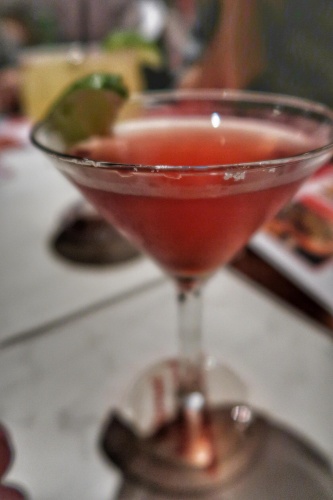 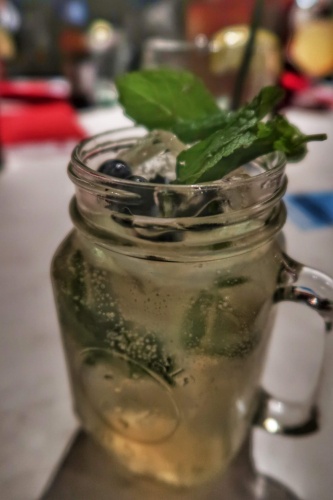 Here’s some shots of the menu if you’d like to see some of what they offer. 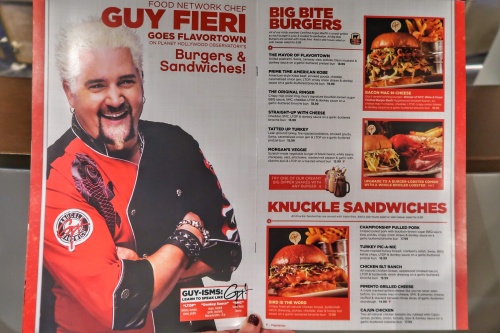 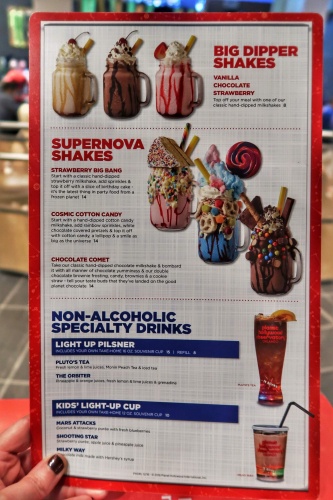 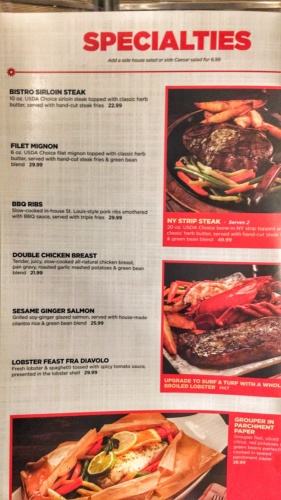 We order our entrees and proceeded to wait. As I said, it took quite a while to get our food. After about an hour we asked our server (again) and she gave us an unsatisfactory answer. (Again.) So we did the thing I dread. We had to ask for the manager. See, I’m one of those people who hates to complain. I don’t like the tension or the conflict. So unless things are really bad I usually won’t ever say anything, much less ask to go over their head. The fact that I was ready shows you something. The manager was very apologetic (and really, isn’t that the first thing people should always do?) and explained that things had been very bad in the kitchen. Apparently it was a bad night and so much food was getting sent back it was delaying all the new orders going out. We all understand that these things happen of course. About 20 minutes later the food finally arrived. 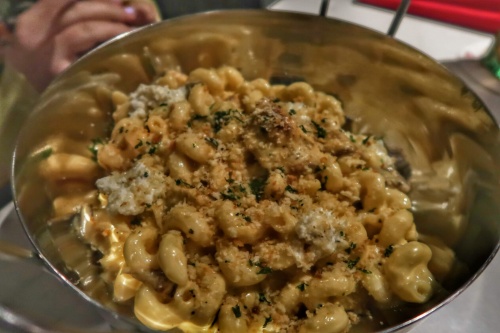 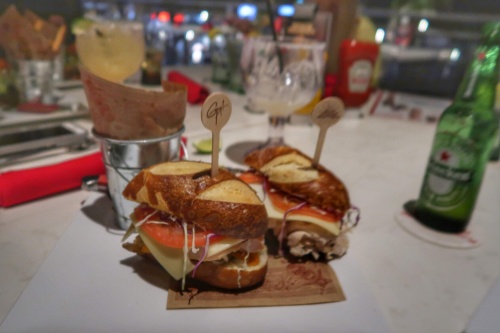 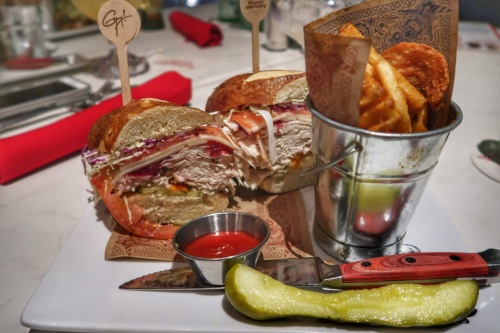 Several of our orders weren’t quite right, but honestly we were so hungry by this point no one bothered to send anything back and we just made do. The food looks good, but doesn’t taste that great. As I said earlier, it’s just typical American chain restaurant food, but a $20 burger should really taste better than this. Especially considering that you can walk right down to The Boathouse and have an amazing out of the world Triple Cheddar burger for less than $20.

The manager took the first round of drinks off our bill, which was nice but wasn’t really enough. It was still a very pricey meal that really wasn’t very good. We opted to skip dessert since it was so late which was a shame since that was the main thing I was excited to try. Plus, we were so cold that the idea of having milk shakes wasn’t very appealing. There’s a tremendous amount of dining choices at Disney Springs, never mind Disney World as a whole. With so many places to eat, this would be pretty low down on my personal list.  If you’re coming to Orlando on vacation, I’d recommend you try another place. The only time I’d say try Planet Hollywood is if you need a last-minute walk up and it’s available, or if you are quite young, and you want to have fun drinks, food, and pictures you can Instagram. That’s about it. Personally, It would be very far down my list of places to eat at Disney World. If I get a chance to try it again after it’s been open for a while, I’ll post an update here. 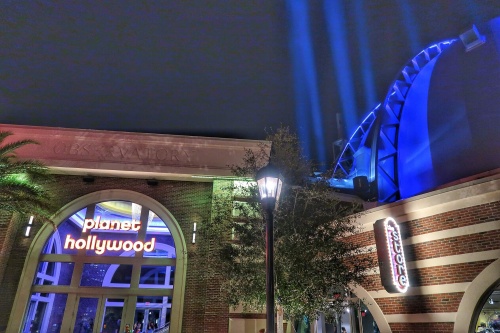 Ahoy mates! I recently had the ultimate opportunity to sail on the Disney Wish media cruise as Serena's guest. As a first time cruiser...