Where my Star Wars fans at?! By 2019 Star Wars fans will be streaming to Disney World in droves to visit the new Star Wars themed land. Currently in construction at Hollywood Studios, “Star Wars Land” (let’s hope that’s just a working title because I really feel like it could be a little more original) will bring a whole new set of fans to Disney World when it opens. But until then, there’s still plenty of Star Wars fun to enjoy.

The Star Wars offerings are currently spread through various locations but they’re all in Hollywood Studios. So if you’re a big fan, you’ll want to allow plenty of time for this park.

Here’s a master list (see what I did there?) of everything a Star Wars fan will want to check out during their next Disney World vacation. 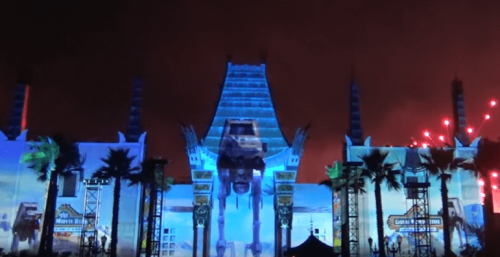 Everything Star Wars at Disney World

Meet Kylo Ren: Launch Bay -Kylo is surprisingly intimidating to meet.  I’ve brought several friends who kind of feel like he’s going to be a little lame to meet and find that he has a more powerful presence than they expected. I think he’s so much fun- he likes to get really close to you and stare menacingly into your eyes. Makes for some fun pictures. Tip: if you have a Disney Chase Visa you can go to a special area with a shorter wait time to meet Kylo Ren. Ask a Cast Member where to go when you get to Launch Bay. 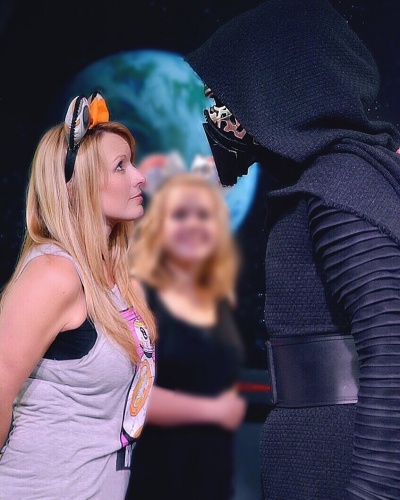 Meet Chewbacca: Launch Bay – Chewbacca is another fun meet and greet. He is super tall, loves hugs and makes some great Wookie sounds. He also takes a pretty good selfie. If you’re wearing anything representing the dark side he will express his, um… concern.

While you’re at Launch Bay take some time to look at the displays of the props and things they have out, There’s quite a few art items and replicas you can even purchase if you’re interested. 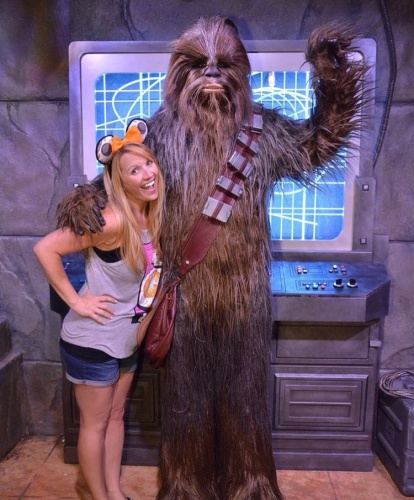 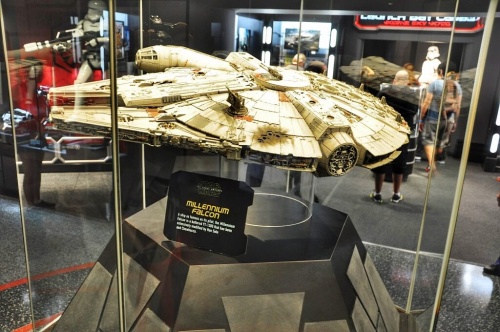 Meet BB-8: Launch Bay – This is a fairly new meet and greet added to Launch Bay. BB-8 is perched up high and able to “talk” surprisingly well to guests. Cast Members are there to help interpret and help conversation along. Kids especially love meeting him. I completely geeked out when I first saw him- he’s seriously THE CUTEST. 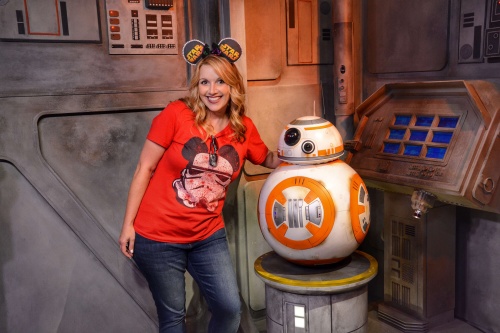 Trade with a Jawa: Inside Launch Bay there’s a little area that represents the Cantina, Here you’ll find the Jawa’s wandering around and interacting with guests. Jawas come here to trade and they are eager to make a trade with guests. They are especially choosy with what they will take so you may have to try several items. They will not take money, trash or Disney pins. Tip: They love shiny sparkly things. I’d recommend you bring a little cheap glow stick with you. They love those. 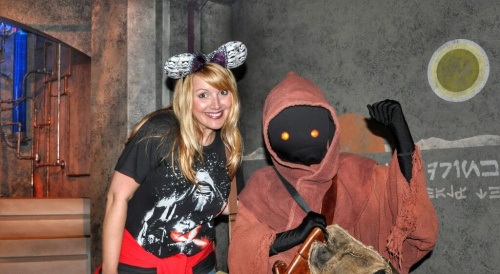 Ride Star Tours: The original Star Wars attraction has recently had a remodel complete with upgraded simulator technology and rides that incorporate new characters and destinations from The Force Awakens. It’s said that there’s more than 50 different combinations of opening and ending scenes, meaning Star Wars fans will definitely want to ride more than once. You can get a fast pass to minimize waits on Star Tours. Don’t forget when you’re there to get a picture on the speeder photo-op across from the ride entrance.

Oh, and one person in each ride is chosen to be the “rebel spy”. You’ll understand when you ride it, but if you get chosen promise me you will buy the “I’m the Rebel Spy” t-shirt they sell in the exit store. It’s required. (not really but its way cool) 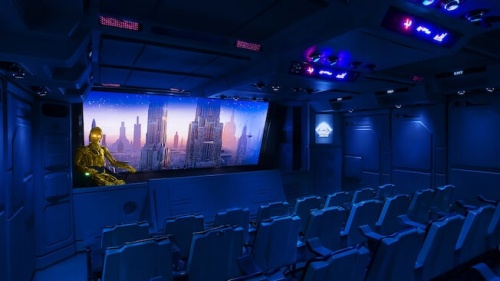 See The Jedi Training Academy: This show is held on an outside stage right next to Star Tours. They choose a small group of children to be the young Jedi “Padawans” who will help defeat the Sith. It’s a really fun show and you’ll see some classic Star Wars villains. Usually some combination of Darth Vader, Darth Maul, Kylo Ren and/or The Inquisitor.  The show is 25 minutes and happens continually throughout the day. Check the times guide for current schedule.  My review of this show is here if you’d like more details.

Now, if you happen to have a young Padawan with you who’s also a Star Wars fan and between the ages of 4-12, they can actually participate in the show. Let me tell you, this is an awesome experience and worth taking the extra time to get them in it. Here’s a great article that tells you how to get your kid in the show. 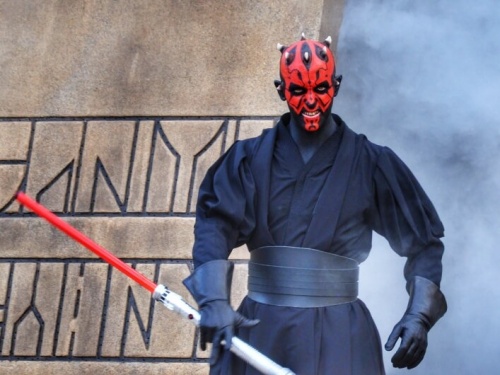 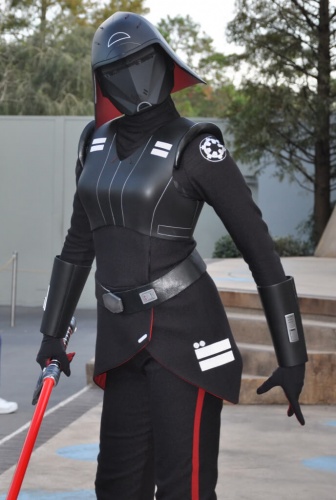 March of the First Order: This Stormtrooper March is led by the wonderfully sassy Captain Phasma. She leads her troops right down the middle of Hollywood Boulevard and ends up at the center stage in front of the Theater. This is sort of the “pre-show” for the Star Wars show that I’ll tell you about next. To be honest though, I prefer this to the actual show. I love Stormtroopers and seeing them march down the park is cool. This is a pretty easy show to catch- just be int h general area around the start times- it’s not something you need to line up early and get a spot. Once you watch them you can stick around and see the stage show afterwards. 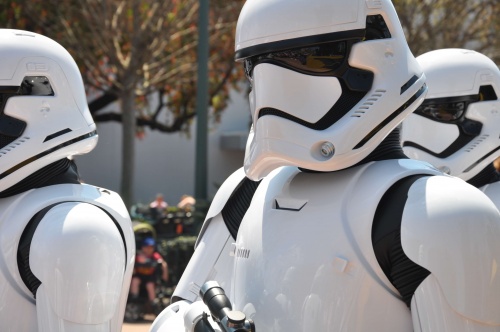 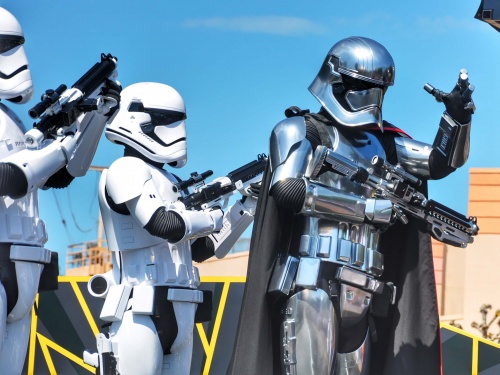 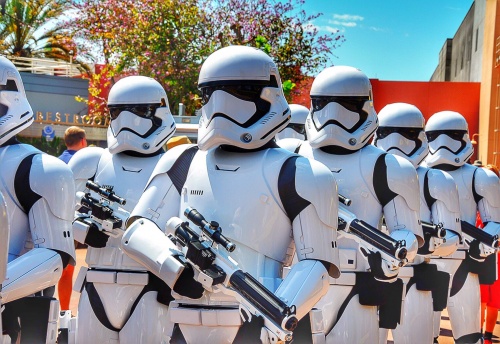 Star Wars Stage Show: Star Wars a Galaxy Far Far Away is a stage show that takes place throughout the day on the central stage in front of the Chinese Theater (Great Movie Ride). I must be honest, it’s not the most fantastic show that Disney’s ever done. It kind of feels thrown together at the last-minute and it’s essentially a screen showing clips of all seven movies interspersed with characters who walk out on the stage and pose for a moment before leaving. However, for the real Star Wars fan, the cool factor of seeing some of these characters is worth checking out. I mean, Boba Fett people. That’s worth it right there, am I right? You can get some great shots of these characters if you can get a spot towards the front of the stage. TIP: This spot is in full sun with zero shade ever. Meaning it’s like standing on the surface of the sun. So try to catch this show earlier in the day because in the afternoon it’s just too dang hot. 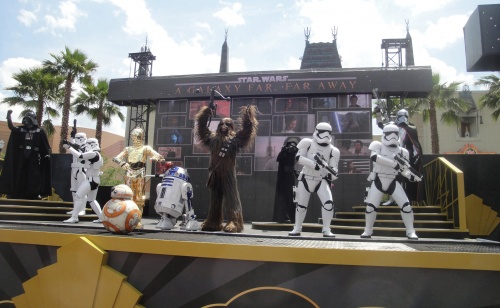 Star Wars Fireworks: Star Wars A Galactic Spectacular is the official name of the show. All you need to know is its awesome projections, lasers, and lighting effects combined with fireworks and amazing Star Wars music. This is a MUST SEE for any Star Wars fan. Trust me on this one. Try to get a spot between the two large brown pillars (right before you enter the open area in front of the theater) This is the ideal spot to see both the fireworks and the projections. If you get too far back your view of the fireworks is blocked by buildings. There is a Dessert Party option for this show, however, it’s just not worth it. The desserts are just average, and you have to move away from your eating area to a viewing area to see the actual show. Save your money and buy more fun souvenirs. Plus it’s not that hard to get a decent spot to watch the show. Arrive 30-45 minutes early depending on how crowded the park is that day. Note: You won’t be able to watch this show and Fantasmic. That’s by design, so you’ll have to make a choice. If you’re a Star Wars fan you’re choice is clear. This show is held each night. Times vary but usually around 9:30 or 9:45pm. 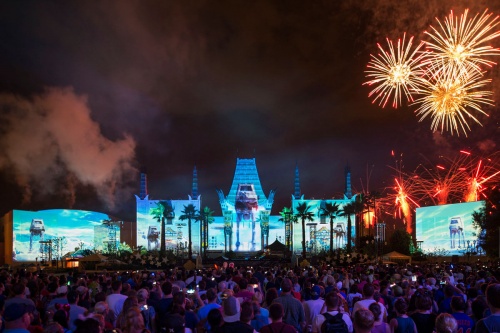 Food and Snacks: There are several options to get your cool Star Wars themed treats. In several places through the park (like Starbucks, the Sweet Spells candy store, and Backlot Express) they offer Star Wars cupcakes. They vary the types, but currently it’s a Lemon flavored BB-8 cupcake, and a dark chocolate and peanut butter Darth Vader one. 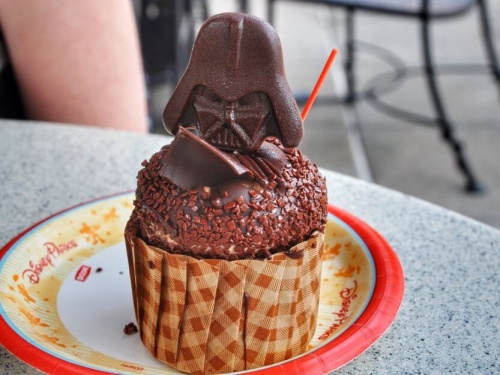 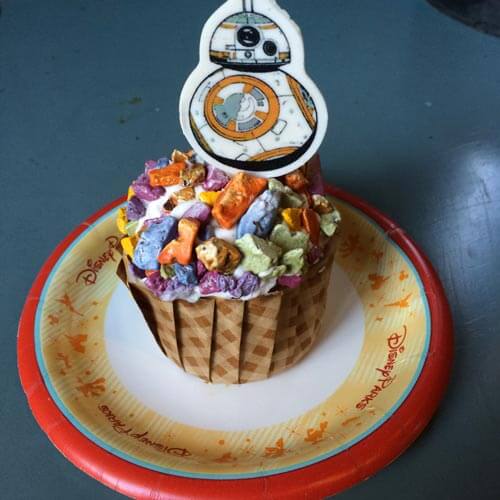 If you’re looking for actual food, try Backlot Express. This is a quick service place that’s right next door to the Jedi Training Academy. You can even watch the show from some outside seating there. They’ve got some fun options for Star Wars fans. My personal favorite is the Dark Side chicken and waffles. There’s a kids or adult version of this. It’s basically chicken fingers, served with a Darth Vader waffle and syrup. It’s really good. There’s also a Royal Guard burger, which is essentially a burger topped with BBQ and a dark-colored pumpernickel bun. Check out this post from the Disney Food Blog for more details. 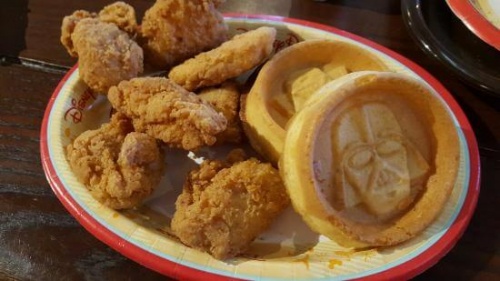 There’s also a small kiosk right outside of entrance to Animation Courtyard. Basically you’ll pass it as you’re headed to Launch Bay. This is the place to buy Star Wars popcorn buckets and sipper cups. (They do sometimes have these at other kiosks but they’re always at this one for sure.) They’ve had several different designs, Han Solo frozen in carbonite was a cool one, Darth Vaders head was also fun. Last I checked it was an X-Wing Fighter for the popcorn bucket and BB-8 for the sipper cup. I recommend the cup, I love mine and enjoy using it at home. It’s currently sitting by my computer filled with water. 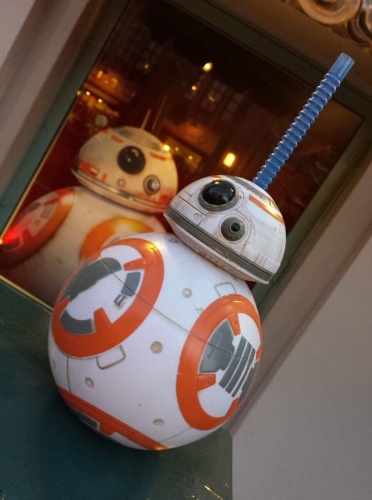 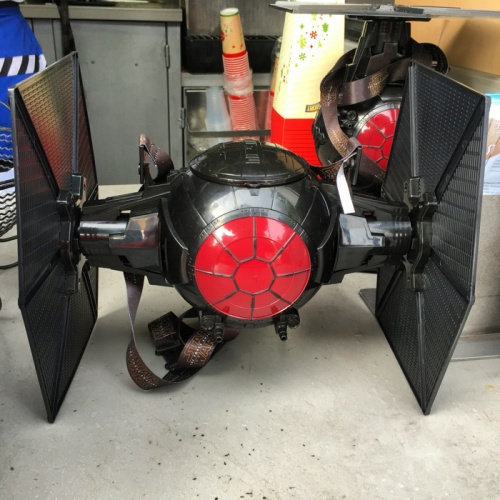 Souvenirs: Just when you thought you had spent enough money, guess what? You exit into the gift shop and BAM. There goes what’s left of it. Honestly, much of the merchandise is stuff you can find other places, so don’t waste your time with things you can buy other places.  Instead, buy the things you can’t get anywhere else. Start with the gift shop at Launch Bay. Like a lightsaber light-up umbrella! Hey, it’s cool and functional. A very responsible purchase I’d say.  They also have those cool realistic Force FX Lightsabers. 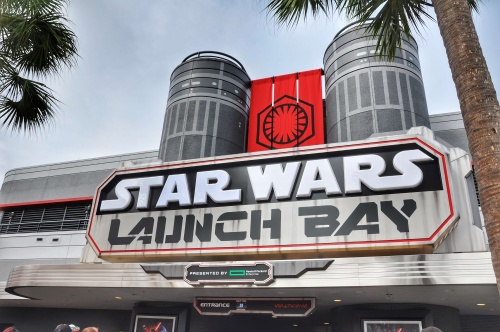 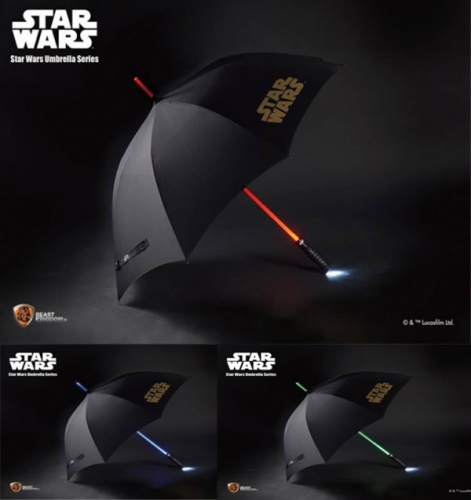 Another fun souvenir is found at the other main Star Wars store, Tattooine Traders. That’s the one where you exit the Star Tours ride. Here you can create personalized name tags with your name written in Aurebesh, one of the alphabets used in the Star Wars galaxy. I think last I checked they were around $12 bucks, making them a pretty affordable and unique souvenir. 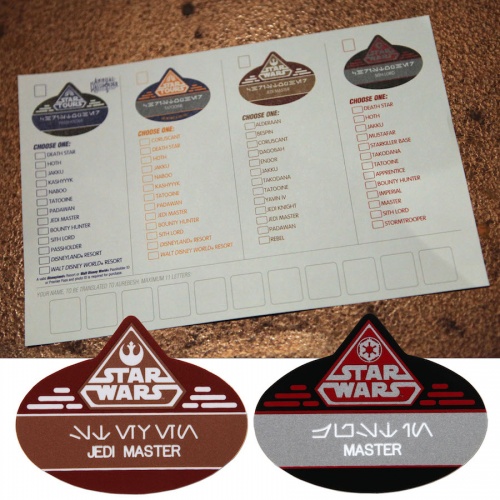 In summary: Make sure you meet the characters, ride Star Tours, and see the fireworks. They are absolute deal breakers. Here’s a handy-dandy map I made showing the locations of where these areas are in the park. You can screenshot it to have with you.  Enjoy your adventures at Hollywood Studios and may the force be with you. (had to do it, didn’t I?) 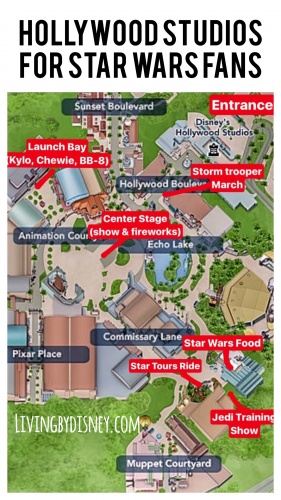