Fans Rant About Their Pet Peeves at Disney World

It’s very important to me to keep things real. In the blogger world there’s a common trend, especially on Instagram, to make your life seem perfect. And there are some accounts that are nothing but pictures of them, professional shots that are perfectly edited, captioned with a little quote or maybe a song lyric.

You know what I’m talking about, right?

I’m not saying there’s anything wrong with that. It’s just, for me personally, I find that a little boring. I want to see the real person behind that. I want to see some of their personality and maybe some of the not perfect things.

In thinking about that, I came across a picture on my phone where I looked completely ticked off. Because I was. Because that happens sometimes. (All though I don’t always document it. 😬) 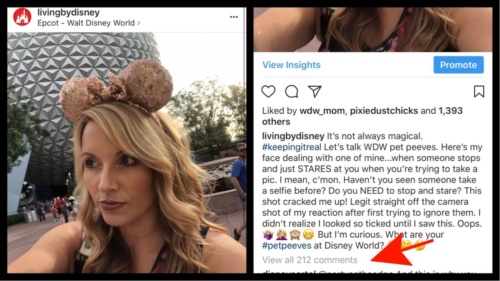 It’s not always magical folks. It’s just not. Even at Disney. So I posted it, told why I was so annoyed, and asked “what are your Disney pet peeves?”

I thought I’d get a few comments about using flash during fireworks, foreign tour groups, big strollers…. haha the end.

I apparently struck a nerve. 😳😳😳

Over 200 comments of people ranting and venting about all the things that drive them crazy at Disney.

I generally like to keep things fairly positive on my social media. I’m usually a pretty positive person myself. So at first I was a little concerned that I had steered things down a dark rabbit hole of negativity. 🙈

But the end result was actually quite interesting. I learned some things. And I hope some of the people who read thru the thread did as well.

Because here’s the thing: there’s always two sides to every story. Yes we know that, logically. But we may not always think about it.

For every person who ranted about the double strollers or the scooters hitting them in the heels, there was someone else commenting about the struggle of maneuvering them thru crowds, and having people dead stop in front of you and not being able to avoid hitting them, and feeling frustrated when they got upset at them.

People who commented about those in scooters who didn’t need them and could walk around just fine. Then people who expressed frustration over having real illnesses that kept them from walking around the park even though they don’t look “sick”, and having people judge them for it.

Some who said they hated when people tried to push in at the last-minute to see a show. Others who felt if you leave empty space around you it will get filled by someone so why not them.

The comments from those with ill children really hit me. They were dealing with a challenging situation already, and rudeness from other guests just made it all so much worse.

So here’s what I took away from all this.

Yes, there’s rude people at Disney. And yes, there are those that abuse the system, either with scooters or disability passes, or whatever… that may or may not need them. But whatever the situation is, the fact is, we just don’t know. There’s no way we can really understand what everyone’s dealing with at a passing glance.

And there are some situations that we will just never truly understand unless we have lived them ourselves.

So let’s just try to assume the best. When possible be kind and nice even when people aren’t being that way back to us.

And if you’re a local who has the benefit of going to the parks a lot, think of yourself as an ambassador of Disney. Helping people have the best experience possible.