Search
HomeDisney Like a LocalSaying Thank You to Disney Castmembers

Saying Thank You to Disney Castmembers

On Saturday at Magic Kingdom is was really crowded and anytime that happens you will deal with some rude people. As we were stuck in a small traffic jam on Main Street due to the parade starting I had a father in a stroller behind me who kept loudly saying, “Excuse us! We just need to get through before the parade comes!” As if that’s not what every single person standing there was also trying to do.

Then he thought it would be okay to run his stroller into the back of my feet, not once, but several times. After the third time I turned and said something and he was (unsurprisingly) quite rude.

But keep in mind that if Holiday crowds can be a challenge to deal with for us as guests, imagine what they can be like for Castmembers! They truly get the raw end of this deal and when people are nasty to them they have to keep their magical personality. So if you are in the parks when it’s crowded, show some extra kindness to the Castmembers you meet. An extra smile and a thank you go a long way.

Beyond basic manners, there are other things we can do to show appreciation.

Getting Them Recognition from Disney

When they go out of their way to be especially helpful there are things you do to get them the recognition they deserve within the company. Disney employs over 70,000 people here in Orlando. Standing out from that amount of employees can be a challenge.

You can help in two ways.

One is going to guest services and filling out a Cast Compliment card. It only takes a few minutes to do. Even if you don’t know their name (like maybe they are a performer who wouldn’t have a name tag) you can say where and when and they can usually locate the right person.

Another even quicker way that I use is on Twitter. If you have a Twitter account you can tweet Disney World and tell them about your good experience. You would want to make sure and send it to WDW Today (not Disney Parks since that’s all of Disney and not WDW specifically) and use the tag #castcompliment.

What’s really cool? If they can, Disney will locate the CM and send you back a picture with them holding the thank you award they got for your compliment. 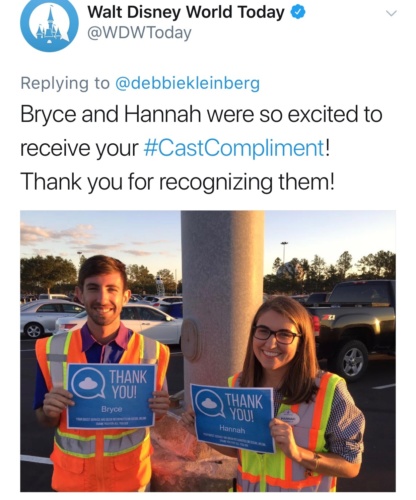 Another option for those that like to go the extra mile.  I sometimes bring little things to give to CMs who are extra magical. Castmembers aren’t allowed to accept tips while on the job, so these need to be things  of small value that will fit in their pocket.

One of my favorite things to get is Disney themed buttons like those from Casey and the Bear. They aren’t real expensive (she has sales too) and I keep a few extra in my bag. Some people keep those mini candy canes or other candy with them, even attaching a little thank you note to it.

I’ve had Castmembers actually get teary, or give me a huge hug for what’s really a small thing. But it can make a big difference in their day.

It’s also a good way to take the focus off of our own frustrations.

Next time we’ll talk about things we can do as guests to deal with the frustrations of crowds at Disney World.