It’s finally here! There hasn’t been a castle show on the forecourt stage since Dream Along with Mickey ended back in April. I hadn’t even realized how much I’d missed having one. The new show, called Mickey’s Royal Friendship Faire”, debuted Friday, June 17th. It’s performed several times a day, and you could argue that there isn’t a need to attend the very first one. But, there is nothing like the first or the last of anything at Disney World. The energy and excitement are incredible. All the biggest Disney geeks are present the cast members, the friends and family of performers, as well as all the local Disney social media people. It’s so much fun!

The castle show is hosted by the fab four, Mickey, Minnie, Goofy and Donald, as well as Daisy which is a nice addition. It highlights Disney’s newer animated films, Frozen, Tangled, and Princess and the Frog. Each film has its own musical number with supporting dancers and performers. And then a finale where everyone joins in.

So how was the show?

Wonderful. I loved it. I know. You’re all still a little salty about Dream Along being gone. But I predict that this new castle show will become just as much of a classic as Dream Along with Mickey was to all of us. There. I said it. The music numbers, especially the opening one, is super catchy. It will become the music we associate with walking thru the hub on our way to something fun. The costuming is wonderful and there’s a lot of humor and laughs. I don’t know how they do it, but the talent level of these performers keeps getting better. Taking the likeness of a beloved animated character is hard enough, but needing to move, walk, and dance like them, make the right facial expressions, adopt their quirks of personality, is a tall order. And doing this all on a stage where the show has to look equally good from far away down the hub, as well as three feet away in front of the castle is a challenging feat. But they pull it off splendidly. 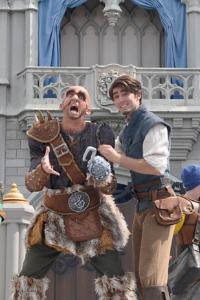 It’s a must-do show as far as I’m concerned. There are always tweaks that are made in brand new shows and I’m sure the castle show will have its share. But if it’s this good from day one, then you can be sure it’s a home run. Great job and congrats to the opening cast!

Mickey’s Royal Friendship Faire is performed several times a day, usually beginning about 90 minutes after park opening and continuing until around dinner time. Check your times guide for exact times during your visit. Keep in mind that this area in front of the castle gets zero shade, so by the afternoon it’s like standing in an oven in full direct sun. If heat is an issue for you I’d recommend you hit a few rides at opening and plan to be back in the hub for the first show of the morning.