Saturday April 2nd the cast of Dream Along with Mickey took their final bows. The show has been a daily fixture on the Forecourt Stage of Cinderella’s Castle for 10 years. Many feel that Disney’s Magic Kingdom won’t be quite the same without it. It’s always hard when Disney brings something to an end. We all know that adding and updating things has to be a part of managing the Disney Parks. But when something leaves that we felt especially connected to, it’s always hard for fans to say goodbye. Even if we didn’t always stop to watch it, the “castle party” was something we heard and saw while passing through the hub on our way to other parts of the park.

The last Dream Along with Mickey show almost didn’t happen. Heavy rain and thunderstorms hit the parks early on Saturday and continued throughout the day. Even when the rain slowed down the earlier shows were cancelled since the performers can’t dance on the slick stage. The final show was scheduled for 4:20. There were people beginning to wait in front of the stage, standing in the rain with hoods and umbrellas. But the Disney pixie dust vibes pulled thru, and sometime around 3:30 the rain finally stopped and the sun began to peek out. By the time the show began there was a huge crowd to witness the final show. A large part of the crowd was made of current and former cast members, many of them having been a part of the show over it’s long run. For these it was a very emotional experience. I can only imagine what it must have been like for them, having worked daily on the show, and certainly bonded with many of the other performers over time. There were lots of tears and hugs.

Having so many super fans in the audience made the final show even better. A huge part of the audience knowing every word to every song and dialogue and singing along made the experience so special! I was able to live broadcast the show on Periscope and so many were able to watch along with us. It felt like a Disney nerdfest of the best kind.

To all the Cast Members who were a part of this show over the years, thank you. Thank you so much for entertaining so many people. For being such an important part of that magical feeling that we all had when we watched it. For your energy and passion, despite the heat and crowds, and regardless of how many times you had all ready performed it. Whether we saw your face or not, you were a part of Disney history. So many people have pictures and videos of this show as part of their best Disney vacation memories. Dream Along With Mickey is one of those things that make Disney World special, and keep us coming back year after year. We will always remember chanting “dreams come true!” Now that the show is done, we’ll have to take Mickey’s advice, and “take the dream with you, wherever you may go”. 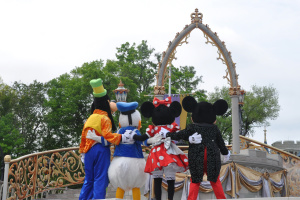 A new castle stage show will begin this summer called “Mickey’s Royal Friendship Faire” featuring characters from more recent movies including Tangled, Princess and the Frog, and of course, Frozen.

Pictured above, are some awesome Disney friends who watched the show with me. You should follow them! Check them out here:
Corinne, Spokesmayne, and Lindsey

Enjoy this photo gallery of the last Dream Along with Mickey show taken by the super talented Lindsey- you can connect with her on Instagram or her Facebook photography page.