If you are looking into relocating to Orlando it will help if you narrow down the areas you want to search. Otherwise you may feel overwhelmed with the amount of choices. There are a lot of great sites to get information but the one I used the most is the City Data Forum. It’s been a great resource for me in reading honest reviews and answers from Orlando locals. However, take your time in reading through the many pages of questions and comments. There are lots of opinions and they range from “Orlando is the worst place don’t ever move here” to “It’s heaven on earth and you will never want to leave”.Here is a post that is a prime example of what I’m talking about. Check out “A Few Things to Know Before Moving to Orlando“. Now if you just read the original post you would be seriously rethinking moving to Orlando. You have to read all the follow up comments. Many of the locals refute his loose claims with facts and data that make his points basically invalid. So read as much as you can but take the most positive and the most negative comments out of the mix. What you have left will probably be the most accurate and truthful of how the majority really feels.

After doing a lot of research I narrowed down my search to several areas. First and foremost for me was proximity to the parks. If I’m relocating 12 hours away I want to be less than 30 minutes from Disney. To me, this was a priority. Anything over 30 minutes means I will rethink how often I go. I may only have a small chunk of free time and if it takes an hour just in driving (round trip) that is too long. I used Zillow to screenshot the areas so I could visualize where they were in relation to the city of Orlando and Disney parks. (Click on the pics to see them bigger) 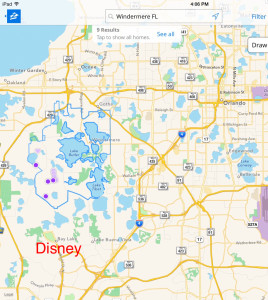 This area was always a front runner for me. It’s just north of Disney, (closest park is Magic Kingdom) and if you’re thinking someone in your family will end up as a castmember its very close to the employee entrance. It’s a newer area with tons of new construction being built. The schools have good ratings. It is known to be a little upscale, primarily because of the original Windermere that has some of the most expensive homes in the area. But the newer sections that are being developed aren’t like that. However, since many of the neighborhoods are so new, expect to see more of a bare look in the landscaping with young scrawny trees and lots of ongoing construction. It’s not a bad thing per say, but I do prefer the look of a more mature subdivision where everything looks lush and green. Use google earth to check out the area and see what you think. 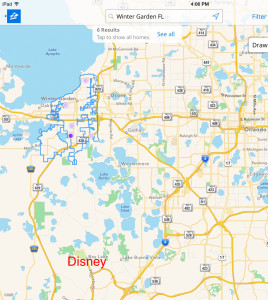 Winter Garden is directly north of Windermere. Here you are getting in the 30 minutes from Disney range, with some of the most northern parts being farther than that. This area isn’t as new as Windermere and I actually liked that better. The neighborhoods are more established, with fully grown trees and landscaping which looks so much better to me. It’s also super close to a fantastic shopping area called Winter Garden Village (see the top picture). Another cool area is the Historic downtown Winter Garden. If you are moving from a more urban area and used to being able to walk to lots of things, this may be a great place to check out. But again, you are getting a little farther from Disney, so it’s all about your personal priorities. 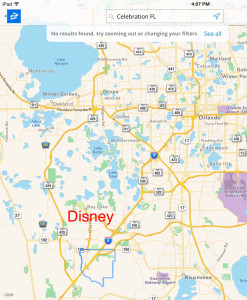 Celebration is the master planned community that Disney originally built but has since sold. The “downtown” area of Celebration is adorable and definitely has that Main Street USA kind of feel. The biggest downsides of Celebration is the cost- you will pay more to live there. In our case it was quite a bit more and we ruled it out as not being worth it. Any homes we found weren’t within walking distance of the downtown area so we would have to drive to go to any of the “amenities”. If we are going to do that I felt like I’d rather live someplace where I’d get more for my money and just visit the shopping areas when I want to. The other downside is that to get anywhere you will probably need to use I-4 which means tourist traffic. More about traffic later… 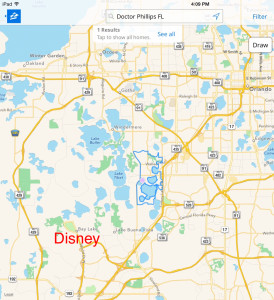 This is small area northeast of Disney. When you drive through it it’s hard to see a clear line where it begins and ends, but the above picture is where Zillow says the lines are. There was nothing in our price range available in Dr. Phillips.  It’s definitely more upscale, lots of gated communities, country clubs and golf courses. I ruled it out right away for us so I can’t tell you too much more about it. Search it on the city-data forum for more info. 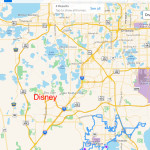 Kissimmee is an older area of Orlando and definitely has a seedier look to it. There are some nice homes there, but it wasn’t an area I wanted to live. 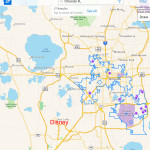 Many of the homes will fall into this gray area of “Orlando”. We looked at a few on the most western edge, but beyond that we were getting away from the area we wanted to be in.

A note about traffic: Traffic was a concern of ours- if you have driven on I-4 you know it can be really congested. And tourist traffic, full of people on vacation who have no clue where they are going can be particularly annoying. (Of course I will be one of those clueless people for a while so I probably can’t really complain.) One thing I learned from the city-data forums (and our realtor confirmed this) is that being off of 535 allows you to get many places without having to use I-4. Many of these routes require tolls but I would take that over stop and go traffic. The areas of Windermere and Winter Garden are mostly off of 535. Here is  picture of 535 in relation to I-4: 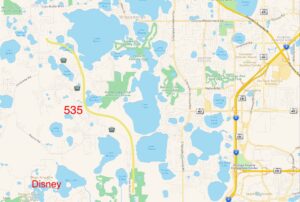 Pros and Cons of Living in Orlando Florida

Now that I've been in Orlando (technically Windermere which is a suburb area of Orlando) for three years, I feel like I finally have some...

Am I Glad I Moved to Orlando? Three Years of Living by Disney

It's been three years since I uploaded the "I have a Dream" gif (below) into my first ever blog post and we officially moved to...