Since moving to Orlando from Virginia I have created a bucket list of things I want to do in the parks. I wrote the list here: Disney Like a Local The Ultimate Bucket List. I have checked off my first item on the list: Character Day! The Character Day Challenge involves an entire day of nothing but visiting as many meet and greet characters as you can fit into the day. The original idea of this challenge came from Kenny the Pirate. (check out his site and subscribe- he’s got some great articles!) Kenny’s record for number of characters met in one day is well over 70. I can’t even. Thirty sounded good until that, huh? 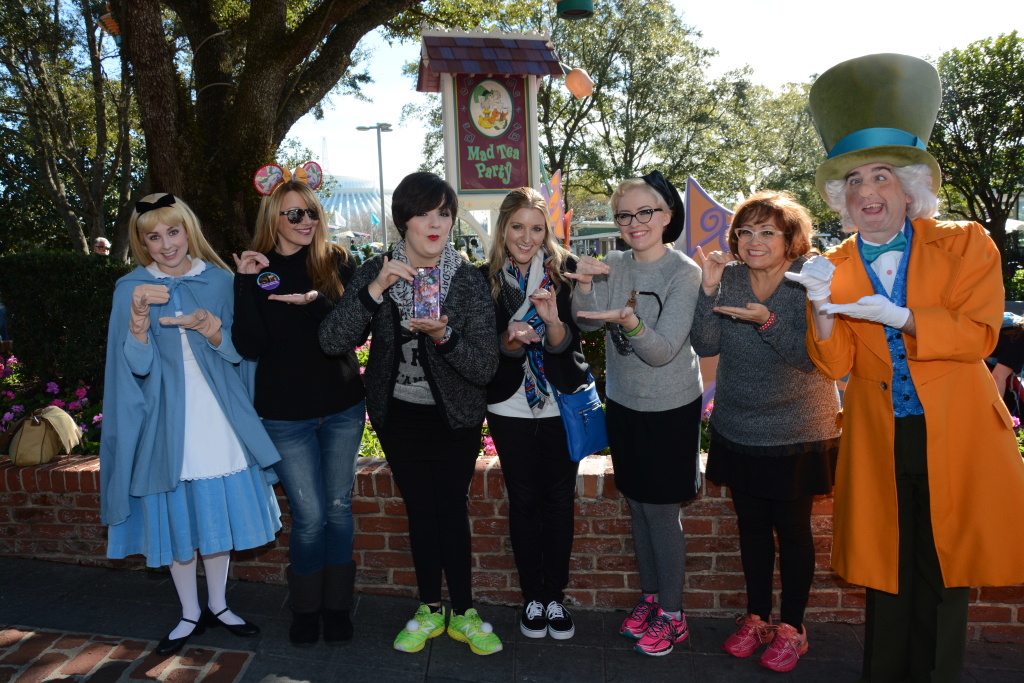 First my friend Jenn, who I had met at one of the Disney Periscoper meet ups, contacted me about getting together when she came to town from NY. She was totally up for doing the character day with me. Then I contacted some of my favorite DisneyScopers, May, Tooti and Twinkie from @365atDisney. (If you had read my “Five Periscopers You Should Follow” then you would all ready follow them. So surely you are, right?) They were on board as well. So the five of us ladies were ready for the Character Hunt.

So why do a whole day of characters? Well the idea for this bucket list is to take time to do things you wouldn’t ordinarily do when you are only here for a short vacation. When you’re trying to squeeze in the highlights from all four Disney Parks it’s hard to fit everything in. Character meet and greets tend to be something that people skip in favor of getting the next big ride. But I would argue that if you skip characters you will miss out on a lot of what makes a trip to Disney so magical. So make sure you make visiting at least a few characters a priority on your next Disney trip.

My favorite characters to visit at Walt Disney World:
The Tremaine’s (Magic Kingdom (usually just the sisters) and 1900 Park Faire Dinner)
Gaston (Magic Kingdom near his tavern)
Peter Pan (near the ride in MK but only during select times)
Baymax (Epcot Character Spot)
Talking Mickey (City Hall in Magic Kingdom)

Those are the ones that are consistently really good for interaction and the time spent with each guest. There are many more that can be great or can be meh depending on timing. But, remember even a so-so interaction can get you some great pictures!

First let me tell you about some of the highlights from the day and then I’ll give you tips on how to plan your own character day. We met at opening in front of Magic Kingdom. I had grabbed a few fast passes for us, but of course, Anna and Elsa from Frozen were all ready gone. Getting FPs for them is next to impossible unless you’re booking very far out or have a super small group. So we headed there first. We met an amazing CM named Sam who works at the Princess Hall. Tootie and Twinkie knew him and he got us in pretty quick to see the Frozen sisters. We then met Cinderella and Rapunzel also in the Princess Hall. At this point the Tremaine’s came out and starting riding the carousel. I can’t even tell you how funny they were. Fortunately you can watch it since we Periscoped it!

Then, after they rode the carousel, some guy sort of proposed to Drusilla. Her reaction is priceless! Look at about the 7:00 mark:

We used mostly Photopass photographers for documenting our character visits. All though a few of them sometimes don’t show up even after you scan your magic band. If that happens to you, contact Photopass thru guest services and they can help track down your pictures for you. You can also stop by in the parks and have them find your pictures right away.

We got so many great pictures!

A few of my favorites: 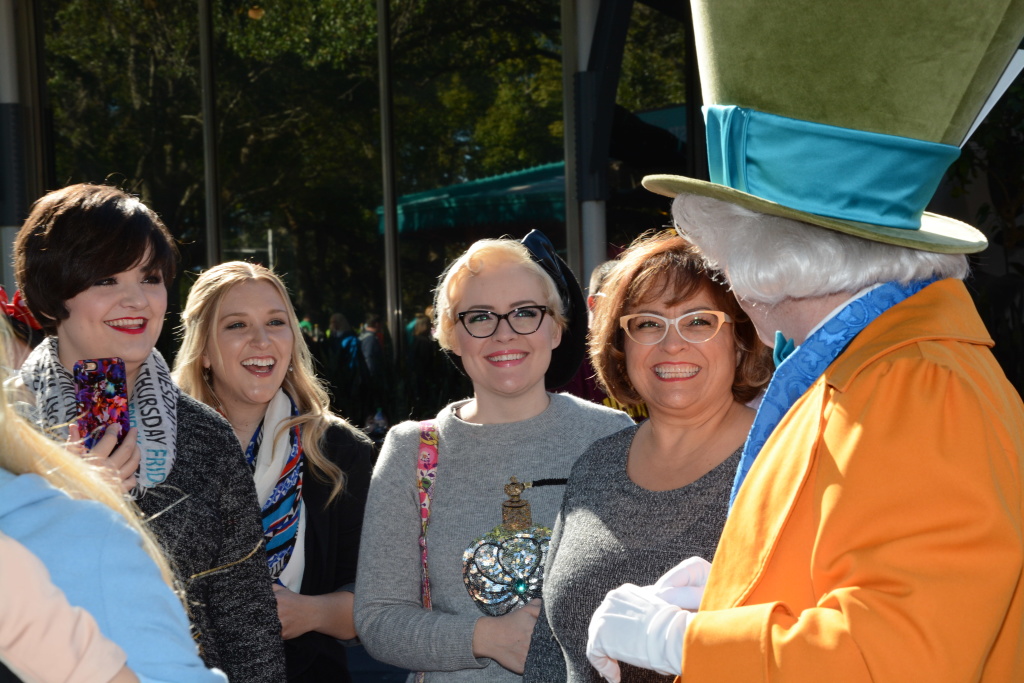 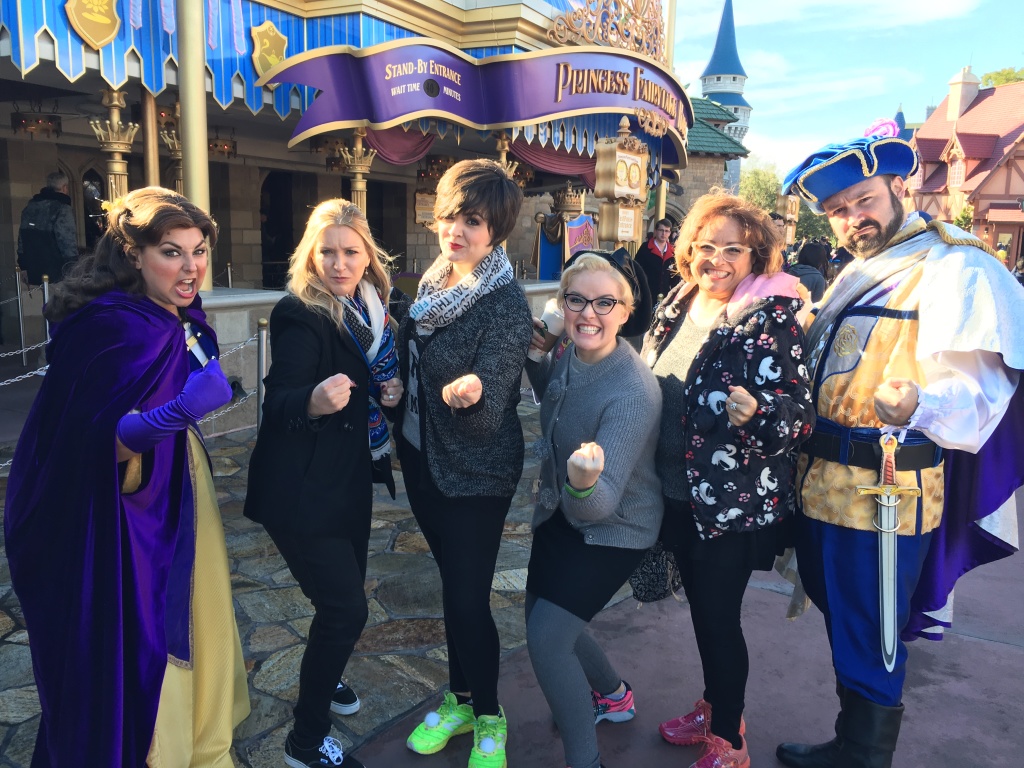 Another great moment in our Character Day was our meeting with Peter Pan. He was amazing! He even did the rooster crow. So perfect.

So how can you plan your own Character Day? Well first off, you need to know what Characters will be in the park that day and what their appearance times are. Each character has different time windows. Some only appear in the first part of the day, so if you don’t catch them in the morning you won’t have another chance. Others appear all day. Many of the outside meet and greets only meet during the day and close at dark.

What made my planning tremendously easier is using Kenny the Pirates Character Locator. He keeps track of all the current characters at the parks so you don’t have to. I’m not sure where he gets his info but he is always the first person the break news of any character changes in the parks. He does his Character list as a subscription service. I can understand why since it must take a ton of time to keep this list so up to date. For $6 a year you can have access to his full list. Personally, I felt it was well worth it. You get a list of every character by park, you can sort by name, or land, or time. He even gives you tips on things to say to them and ask them about. I’d recommend checking his site out. (I should state that I don’t get anything from this- just telling you guys about a site/service that I really liked.) Here’s a screen shot of the info just for Aladdin at Magic Kingdom so you can see what you’ll get: 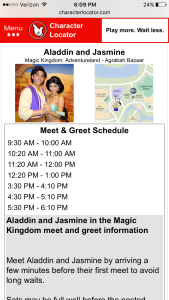 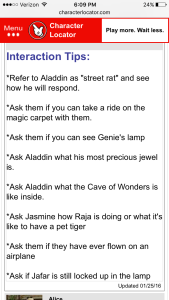 My first Disney as a Local Bucket List was a huge success! So many of you contacted me and told me how much you enjoyed following along with our adventures. I’m so glad you did!

So, do you want to do your own character day challenge? Let me know so I can follow along with you!

***(Update: The replays for these live streams that I refer to have since been removed)