Search
HomeDisney Like a LocalAttending Special Events at Disney World: What You Need to Know

Attending Special Events at Disney World: What You Need to Know

There are many special events that take place at the Disney World parks. Some are “official” events planned by the Disney company and some are not. This week we had the 45th anniversary of Magic Kingdom which was an official Disney event. We also had the final performance of the Main Street Electrical parade, and while it’s maybe not an event according to Disney, if there is a first or last of anything at Disney World trust me when I tell you it will be quite the event. Having just had two such events in the last week I wanted to give you guys some trip planning tips regarding incorporating these in your vacation. This is mainly geared toward those who don’t live nearby or who don’t visit Disney World very frequently.

Before I was a Disney local I used to watch all the social media when anything new happened in the parks. I’d wish I could be a part of it. So maybe you have been planning your WDW vacation for months and you find out a special thing is announced and it’s actually happening when you will be in the parks! Well of course you will go, right? Well, let’s not rush into that just yet.

The Downside of Special Events

In a word: crowds. Big, big crowds. See you don’t see the full picture when you’re just watching it all unfold on social media. Take the 45th anniversary day at Magic Kingdom. In any location that had special items for the celebration lines were atrociously long. Even if you didn’t want to buy any of the merchandise, cupcakes or other special items, you would still be unable to use any of those areas due to lines and crowds. That means all of Main Street, Gaston’s whole area, Starbucks, etc. So when you see people showing those cool anniversary shirts they bought? Yeah they arrived early, some before 7am and stood in line for hours and hours.

If you wanted to see the presentation at the castle and get a t-shirt that would be most of your day. Forget rides, parades and characters. Don’t bother with the Fast-Passes you got- you won’t be able to use them. For the last Electric Parade last Sunday, it started at 9 pm. We got there at 4 pm and got our spot. Yep. We sat there for five hours. We did take turns going to grab snacks or take a break, but I never left Main Street the entire day.

Side note: notice the crowds in the picture below? This was the second (muuuch less crowded) performance at 11pm. 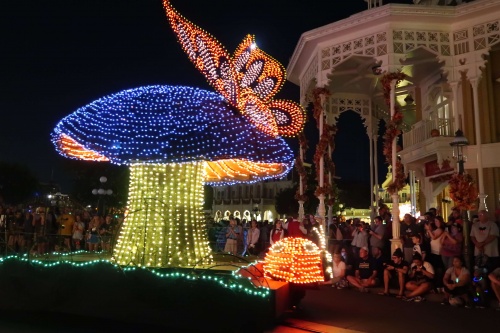 I’m telling you guys this because most people don’t. They don’t say how long they stood in line, or the frustration of crowds, or the problems with traffic control for all the people, or the (bless them) irritable Castmembers. Of course we don’t usually include those in the articles and the YouTube videos. It’s boring and nobody wants to see it. But keep in mind most of us that are crazy enough to go to all these events fall into two categories. We are either locals who can go to the parks anytime we want and therefor don’t mind going all day and getting very little done. Or, we work somewhere in Disney social media and are here because it’s how we make money. Sometimes we are both. But we are NOT like the family of five that waited nearby me who were from some Maryland and had three kids under the age of 10 who just wanted to ride Mine Train and enough all ready with standing here waiting for some boring old guy to talk about 1971. It got a little ugly for them. When I next spotted them go past me later that afternoon they looked frazzled and on the verge of tears. And the kids were even worse.

We all know that a Disney World vacation doesn’t come cheap. Each day costs a lot. So somewhat “wasting” a day at a crowded park getting very little done will have to be compared with how much you want to see and experience whatever’s going on.  If it’s not a huge deal to you, consider that you could visit one of the other parks that’s not hosting an event and have lower than usual crowds and lines. Ultimately it’s what it’s worth to you. But at least now you can know what you’re getting into and make an informed decision.

If you haven’t seen it, here’s my highlights from the 45th anniversary at Magic Kingdom. You’ll see some of the merchandise lines as well, just to give you a glimpse. Main Street crowds in the afternoon were comparable to Christmas week, so it’s hard core people. You can subscribe to my YouTube channel if you want notifications when I add something. Also, if you haven’t checked out my video on the best of Epcot’s Food & Wine, I’d love for you to.