Ultimate Guide to Mickey’s Not So Scary Halloween Party

Well, it’s that time of year again – HALLOWEEN. It seems to be a favorite for so many and for all the things you can do in Central Florida during this season, Mickey’s Not So Scary Halloween Party is a crowd favorite. The question is, should YOU spend your money on that extra ticket to come enjoy the fun? We got to attend the first party of the year, an early first party at that – right in the dead of summer in mid-August. After checking out what they had to offer, let’s talk about what this party is all about and whether or not the offerings, both new and old, are worth your hard earned money.

In case you weren’t already aware, Mickey’s Not-So-Scary Halloween Party, abbreviated MNSSHP (a clear marketing counter to Universal’s Halloween Horror Nights, which to be clear, is VERY-VERY SCARY), is an annual ticketed event (meaning it is a stand-alone event ticket that is separate from the standard admission…more on that later), which at its core is a park-wide Halloween party at the Magic Kingdom. There are all kinds of activities and entertainment throughout the park, most of which are exclusive to the event.

Costumes are encouraged, though absolutely not mandatory. You’ll find costume people-watching an ‘attraction’ all of its own because people take this opportunity to pull out all the stops. If you’re into costumes, pull out your best one and get ready for a Halloween adventure!

This year parties have started the earliest they ever have, running on select nights from 7pm-midnight. 2019 dates are:

You have 5 hrs to walk around a much less populated, but experience rich park, with themed experiences available for the entire family. That may sound like a lot of time, but Disney did a fantastic job of spreading the engagements all over the park. So don’t let it fool you – the night will zip by you pretty quickly. Planning out exactly what you’d like to do is strongly recommended to get to the most out of your night.

One thing to note is that if you have a ticket for the party, that ticket gives you access to the park as early as 4 pm that day – and I would highly recommend taking advantage of this extra time. Even though a lot of the party-exclusive offerings don’t start officially until 7, this will give you time to get settled, finalize your game plans, and even catch some rides before the party.

We made a recommended schedule for helping you plan your time at the party in order to catch the must-dos. Zoom in and screenshot it so save it for future reference. 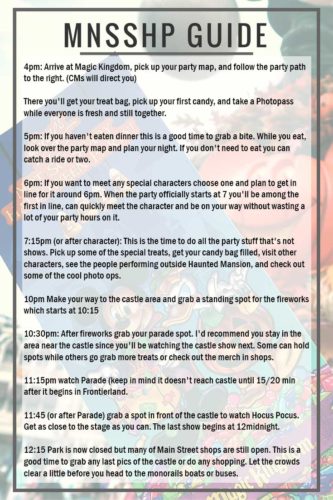 How much is it?

Advance tickets start at $79for adults and $70 for children ages 3-9 (plus tax). For a full list of prices and available discounts visit Disney World’s official ticket page.  As mentioned earlier this is a special ticketed event so this ticket counts as both your admission to the park and your party entry. If you already have admission into the park on the day of the party, a separate ticket price will be charged for the party and you’ll be given a wristband so you can stay in the park once the party starts.

NEW for 2019: For repeat party goers there is a season pass option, This will get you unlimted party visits most nights for $299. Details here.

NEW for 2019 Fireworks Show: Mickey’s Not So Spooky Fireworks show debuted this year and it’s hosted by Jack Skellington. Check out the video of it’s debut below. You can catch this show each party night at 10:15pm.

There are a few new offerings this year that really add a new spark to those who have come to previous parties. In addition to the countless new (and old) treats, 4 areas feature major changes this year: Pirates of the Caribbean, Mad Tea Party, Space Mountain, and Storybook Circus.

Pirates of the Caribbean: This classic gets a fun overlay with live interactive pirates in the queue and on the ride itself. They are shouting about a new scoundrel of a renegade pirate named Gunpowder Pete who is on the loose gunning for Jack’s treasure. You may even see him roaming around the town been plundered as you float on by so keep a keen eye out!

Space Mountain: This ride has always been a fan favorite for so many throughout the year. On Not So Scary nights right at 7pm, this massive indoor coaster transforms into an exploration through even deeper space, so deep, in fact, the light can’t even get there. That’s right the entire ride is in COMPLETE darkness and rocks out to a brand new (albeit completely not Halloween related) rock soundtrack.

If you are a big fan of Space Mountain and are curious about what it would feel like to be hurdled through the black nothing, don’t miss this fun exclusive offering. But, as it is not exactly mind-blowing, or particularly Halloween-y (if that matters to you), my recommendation is to take this time to enjoy the rest of this feature-rich party. 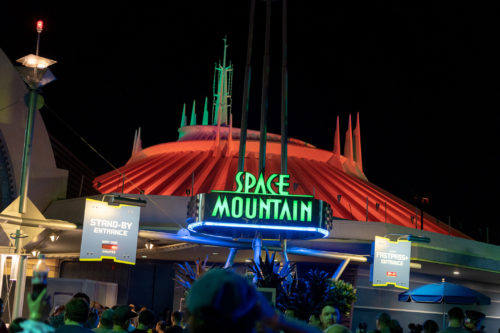 Mad Tea Party: Everyone’s favorite spinning cup ride gets a fun lighting and effect overlay for the Halloween parties that add some fun atmosphere to your ride. New colors and fog effects make it feel like the entire thing has been haunted, giving the whole experience almost a Heffalumps and Woozles feel from Winnie the Pooh. Super family-friendly fun to be had over in Fantasyland. 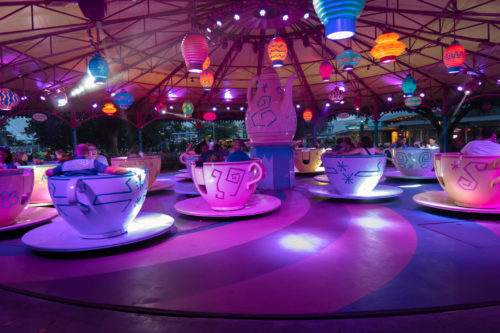 Storybook Circus: This year a brand new attraction has been made for the little ones in your group, the Storybook Circus Disney Junior Jam Party! You can dance along with friends from your favorite Disney Junior Characters, including Doc McStuffins and Timon from The Lion Guard. In addition to the Monsters Inc dance party over at the Rockettower stage in tomorrow land, this is a nice opportunity to snag a couple pictures of your kids with some characters without the wait.

Must Do Activities for MNSSHP

Live Entertainment: There are a few major shows that go on during the party as well as a multitude of roaming and area-specific characters from a live ghost bride at Haunted Mansion to roaming grave diggers around Frontierland.

In terms of show offerings, There are two Zootopia themed pre-parades on Main St., two showings of the Boo-To-You parade that runs through the entire parade route, up to four showings of the Hocus Pocus Villain Spelltacular on the castle stage depending on the time of season, and one grand showing of one of our favorite part of the party, the Hallowishes Fireworks Spectacular.

Scheduling all of these in the same party is a little tricky, so if you like this kind of entertainment, plan ahead because these can eat up the whole back half of your party in no time at all. Again, check that printable schedule above to help you with your timing.

Candy: There are 14 treats locations all over the park, so if you are looking for some candy and some trick or treating, look for anywhere that has the big blow up balloons marked treats for their locations, or consult the party map to find out where they are.

Side note, if you have any allergies there are two “Allergy-Friendly Centers” located at the Town Square Theatre, and by the Hall of Presidents and Liberty Square.

Meet and Greets: Dance parties are not the only places to find characters to talk to. There are characters spread out throughout the lands, and most of them are in special Halloween attire. Some of them are even in unique pairings – Ariel, for instance, is not found in her grotto, but outside with Prince Eric in her human form! Jack and Sally are the crowd favorites here, and their lines can reach up to a few hours sometimes, so again, if meet and greets are your game, planning ahead is essential.

Food: Candy isn’t the only treat available at this happening party…there is food all over the place. Some of our favorite party exclusive food items include: 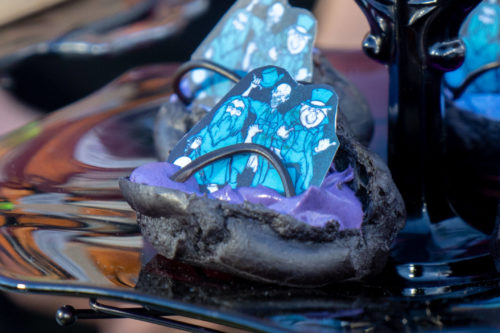 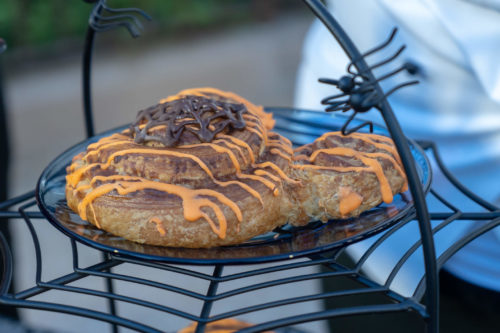 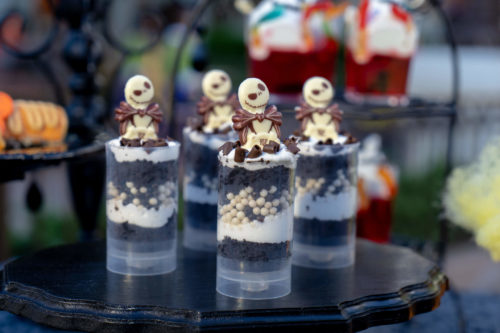 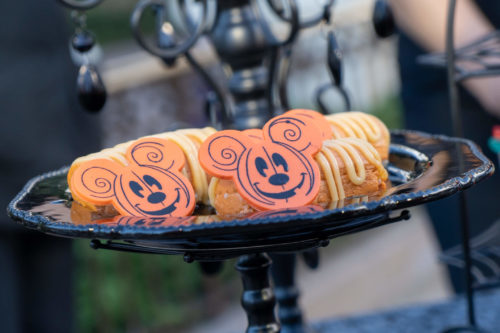 There are even more than that, so if its something a little more than candy that you seek, there’s plenty for you to choose from!

Photopass: There are exclusive Photopass magic shot opportunities at the Halloween parties as well. You can catch them all over the park and the best thing about them is unless you’re already in the know, you don’t really know what you’re getting until you see the final picture in your account! Believe me, it’s a cool surprise to see the headless horseman bucking on his horse next to you, or to see yourself dancing among the Haunted Mansion ghosts. This may even be worth purchasing a Memory Maker package if you plan on taking a bunch of PhotoPass pictures that night.

Sorcerers of the Kingdom: There are event exclusive spell cards available on party nights only, so if you are a collector of these don’t forget to pick yours up at the firehouse near Main St. This is really time-consuming game, and since you only have a few hours to cram a lot of party exclusives in, the Sorcerers game may not be the best use of your time. But, if you do fancy a good old-fashioned card scavenger hunt, its available to you.

Here’s a look at two of our favorite Not-To-Be-Missed shows at the Halloween Party if you’d like to see what they’re all about:

Here’s the party map if you’d like to save them as well. It can help to look over and have an idea of where everything is located ahead of time. 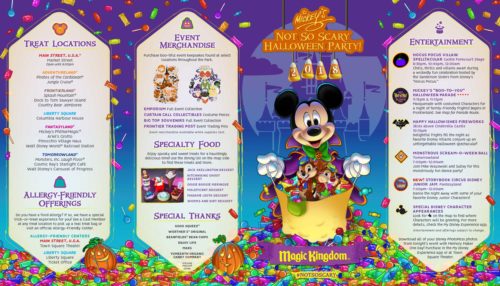 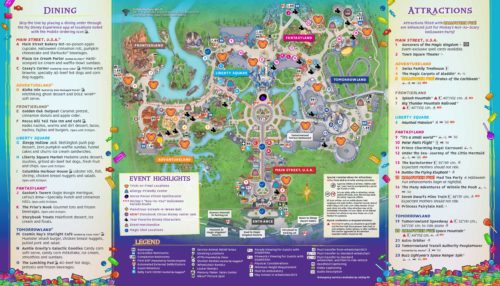 The Big Question – Is It Worth It?

This is an easy one. I can’t imagine a way this wouldn’t be worth the ticket price. There’s simply something for everyone. Rides have a lower wait time since there are fewer people in the park. Meet and Greets are unique. Photopass has special magic shots. Rides get makeovers. Entertainment and Fireworks are state of the art and one of a kind. Even Sorcerers of the Kingdom gets a makeover. And of course, there is more candy and treats than you could ever dream of!

No matter what you like, there is something for you at this party. The question you are going to be asking yourself is whether or not you want to attend more than once. Don’t miss the party this year Not So Scary Halloween Party.

About the author: Chris DeRoche of Mackee Mouse Media is a professional Videographer and designer based in Orlando Florida. He’s dedicated to helping you get the most out of your media with tutorials, pro tips, and gear reviews. With Disney World as his backyard, Chris uses this popular destination to showcase his skills and help teach you how to get amazing results with whatever you try to shoot. You can find his tutorials and subscribe on YouTube, and check out his Disney inspired Tees at Mackryn Designs.

Ahoy mates! I recently had the ultimate opportunity to sail on the Disney Wish media cruise as Serena's guest. As a first time cruiser...

Planning a trip to Walt Disney World? If you are, the number one thing that you must be aware of is that a Park...