Epcot has added a new festival to its lineup. The Food and Wine and Flower and Garden Festivals are enormously popular and it makes sense that Disney decided to try adding another one during January and February.

Let me just cut to the chase: I loved this event! So impressed with it and love the variety of things offered. I would actually say this would rank above Flower and Garden Festival for me, and below Food and Wine. But since I’m not much of a gardener, and I love the arts, it makes sense that I would prefer this one. Read on to see what most impressed me.

This event runs for six weeks, from January 13th – February 20th. It’s only on the weekends, which in this case means Friday, Saturday, Sunday, Monday. So plan your park days accordingly. I didn’t really see a huge increase in crowd levels, other than right around the Disney on Broadway showtimes crowds picked up around the America Theater. If you want the lowest crowds, Mondays would be the best day to visit with Friday and Saturday nights being the most crowded. But keep in mind we are still in slow season so even “more crowded” isn’t really a problem.

There are booths throughout the World Showcase offering special food and drink options for the Festival. If you’ve been to any of the other events at Epcot we are all ready used to this process. There’s approximately 8 for this event so not nearly as many as Food and Wine. There’s a Festival Center which also has some food and drink, and several of the refreshment stops that are always open have a few special items.

There’s some great food choices that are actually gorgeous. Everything with this event seems to be visually pretty. It was definitely approached from an Art aesthetic, and I truly love the attention to detail that was given to everything from the plating and cups that the food and drinks are on, to the colors and typography used in he promotion. It’s really lovely and eye-catching. I’ll show you a few of my favorites below.

When you enter World Showcase if you head to the right one of the first booths you get to is Pop Eats. Both of these treats below are found there. The first is the Pop D’Art. Yes, it’s basically a pop tart. A $4 pop tart to be precise. It is homemade and filled with chocolate hazelnut (Nutella essentially) and was good all though I felt it was a little too sweet for me personally. My family really liked it though. 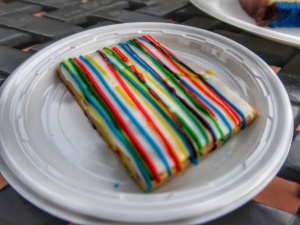 This one is the Almond Frangipane Cake, it’s Almond cake layered with Raspberry Jam and topped with chocolate ganache. It’s served very cold and I loved it. Also at Pop Eats. 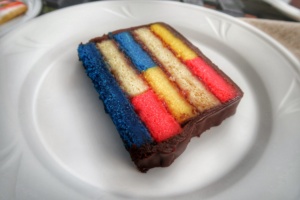 Another thing I really loved was this Trio of Savory Croissant Donuts. They were excellent and so unique definitely worth a try. They are in the Festival Center which is located in between Test Track and Mexico (where they had the craft beer place for Food and Wine.) 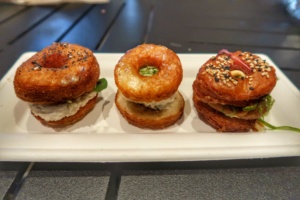 At the stand near America was a giant chocolate chip cookie palette. This one looked cool but was just meh. 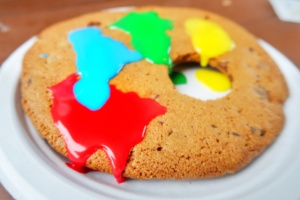 (For a full break down of all the food and drink options check Disney Food Blog.)

I am in love with all the fun backdrops they set up for the Art festival! There’s three different “immersive photo stops” throughout the park. The one in France (it’s actually right by the bridge at the International Gateway) lets you jump inside a Monet painting. My friends and I had fun looking as if we blended into the scene. 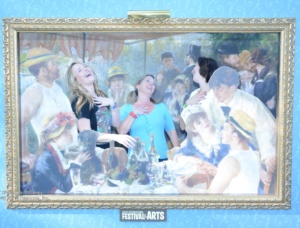 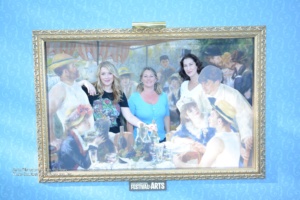 The second one we got to is in America right in front of the Theater. This one lets you cross the Delaware with Washington. We had the most fun PhotoPass cast member who prompted us on poses to make it fun.

The third we reached is near Italy and it’s a double frame with the Edward Munch “Scream” and Mona Lisa backgrounds. 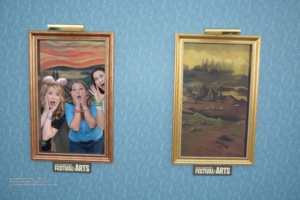 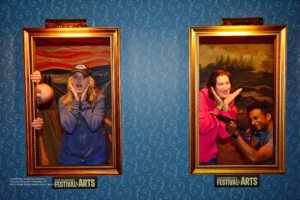 There are so many extra things to see. I think it would take a couple dozen visits to experience it all. On the Fountain View stage (the one by the fountain) They have some great rotating shows. The living Statues are there at various times throughout the day. 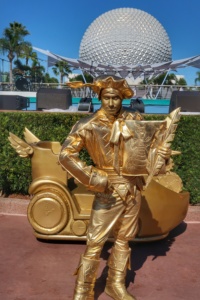 American Music Machine performs a killer acapella medley of popular songs. They are all seriously talented. There’s also some artists who do shows, one guy who paints with glue and throws glitter onto the canvas. He makes it into quite the show and paints incredible portraits in just a few minutes.

You don’t just look at art at this Festival, you can actually be a part of it. Glidden sponsors a large group mural project. It’s basically a large mural that’s been tiled to a paint by number. You line up and are given a small container of paint and a sponge brush. The paint has a number written on it, and you’re told to paint any 5 squares that have that number written on them. 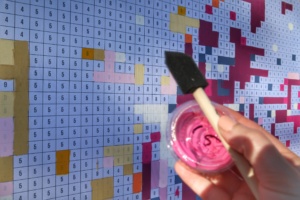 When done they give you a card showing what the completed artwork will look like (well, somewhat pixelated version anyway). It’s a brilliant sponsorship for Glidden who also has opportunity to show you their Disney inspired paint colors and let you even paint with one of them.

Throughout World Showcase you will come upon chalk artists working on their art. This perspective Statue of Liberty was my favorite. Here’s the artist demonstrating how it looks like she’s standing in the torch. 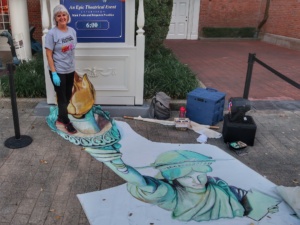 Now, let’s talk about my favorite part of the entire Festival of the Arts: The Disney on Broadway concert series. If you go to this event, make sure you are able to catch this show. It is truly amazing. There will be different performers each weekend. We saw Josh Strickland who is the original Tarzan, and Ashley Brown who was the original Mary Poppins and they blew my mind with their talent. So phenomenal. It felt like such a treat to this level of performance included without a separate ticket price. There’s 3 shows each night at 5:30, 6:45 & 8pm and it’s at the America Theater in World Showcase. Each show is 30min long. They do line up fairly early so if you want a really good seat you can go about 45 minutes before showtime. But if it’s not a big deal to you then just go about 15 minutes early. 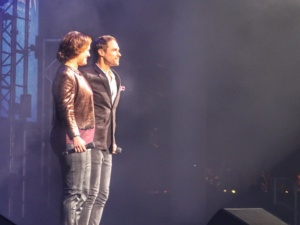 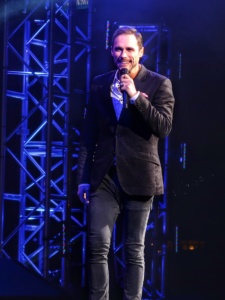 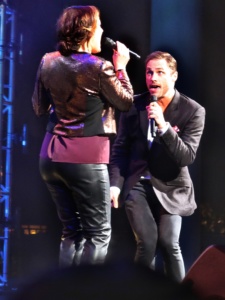 In summary, I really enjoyed the Epcot Festival of the Arts. I was worried it would be somewhat thrown together, but it sure didn’t feel that way. I think it has a definite place in the annual events at Disney World and sincerely hope they continue each year. There’s much more that I didn’t get to try in the two visits I’ve had, but if I wait until I’ve done most things the Festival will be over. So here’s what stood out to me, and I look forward to returning to try even more. When things hold up to repeat visits, that’s when you really know you have a hit on your hands. Well done Disney. Now shut up and keep taking my money since you know I’m coming back. 🙂